You are here: Home > Bulk cooking > The strike is over! 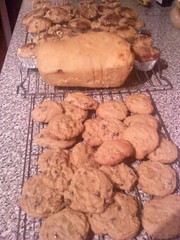 I went on a 3 day strike without cooking or baking in bulk, but today I made up for it. We ate from the freezer and went out to eat during the strike. Today, I baked a loaf of cinnamon bread, 2 dozen cinnamon muffins and 4 dozen whole wheat chocolate chip cookies in about an hour.

The kids had cookies for an after school snack. They’ll have cookies in their lunchboxes all this week. And we have a choice of cinnamon bread or muffins for breakfast. Yummy.

I like to bake this way when I already have the oven and the dishes are already dirty. I did use the muffin cups so there is little clean-up. I also used the Artisan dough which was pre-mixed. I just had to roll it out and sprinkle cinnamon and sugar. Do you ever get in a baking frenzy?