Do you remember the frozen TV dinners growing up?  They had separate sections like a lunch tray and we actually ate them in front of the TV as a treat. Everyone got to pick out their own meal at the grocery store so we could all have different ones. I think I picked out a chicken breast (that part I can’t totally remember) because we didn’t eat them that often.

We actually had these small frozen pot pies more often and boy did they take an eternity to cook. It seemed like an hour or more and sometimes the middle would still be frozen.

Those were the days-frozen convenience. I admit I enjoy having a night off from cooking, but I want a nice hot meal and NOT a store-bought TV dinner.  Tonight was one of those nights when I spent more time cleaning the dishes than I did with my hands preparing the food. Everything we had was FROZEN. I did thaw out the manicotti 24 hours ahead of time, but the green beans and bread sticks and dessert were still frozen at 3:30 today.

All I had to do was parboil my green beans (from this summer) and return them to a clean bath water with olive oil and salt to simmer for an hour.  That was the end of my cooking.  I threw 2-8×8 pans of manicotti in the oven for an hour (see my easy no-boil recipe here). I removed the bread sticks and cookies from the freezer.  After an hour I placed the bread sticks in foil for fifteen minutes.

Here is our modern whole foods TV dinner. 5 minutes of hands on prep. 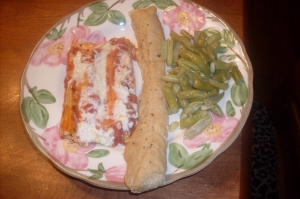 Whatcha think? You can cook once and eat one or two times without having to lift a finger (okay, maybe your forefinger to ask the kids to wash the dishes:) Have you considered cooking and freezing extra this year?