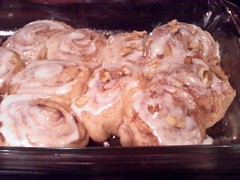 My house smells like Cinnabon right now-only because I made 48 cinnamon rolls using Artisan bread dough in 5 minutes. I love this cookbook-can’t you tell? I first started freezer cooking Pioneer Woman’s cinnamon rolls, which are excellent. However, I wanted to use white whole wheat flour and I didn’t get quite a good rise as what I wanted. I’ve been doing a lot of Artisan dough recipes and I think I’ve mastered the cinnamon rolls using a modified version of the olive oil dough. 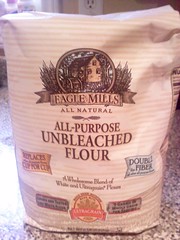 I buy this flour from Ingles.

I start by making the 5 minute dough by mixing the ingredients in a plastic shoebox. I allow it to set at room temperature for 2 hours and then refrigerate the dough until it’s ready to use. Ding! My cinnamon roll lover son wants rolls, so the dough comes out. Usually the dough has to sit at room temperature for 90 minutes (yes, an hour and a half to get a good rise), but a found a time-saving trick. I roll out the dough and allow it to sit for 15 minutes. Because the dough is laying flat and not in a ball, it loses the chill faster!  I love it because I can make cinnamon rolls so much quicker. 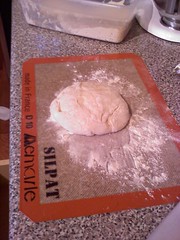 I tried this method with one dough portion first and then I decided to go ahead and make the other three portions the following day so I could freeze these.  The method is the same whether you decide to make a dozen or 48 rolls (all four portions of dough). 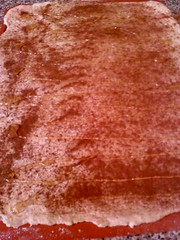 I do not cut on my silpat mat, I moved the dough log to my chopping board. I used my silpat, a flimsy plastic chopping board and a large wooded chopping board for the three portions of dough to rest for 15 minutes. Then I rolled into a log and sliced.

Sprinkle 1-2 teaspoons of cinnamon on the dough and drizzle with honey. Or you can make a mixture of 1 cup white/brown sugar to 1 tablespoon cinnamon in a freezer quart size ziploc bag. Seal, shake to mix and use this on your dough. Store in the freezer on your side door.

I’m trying to stick with honey and raw sugar as much as possible. Roll up the dough in a log and pinch the seam closed. Cut into rolls with a sharp knife or unflavored dental floss as some readers practice, don’t worry if they are sticky. You can dip you knife blade in flour each time to help with this. Place each portion of dough in one 9×13 pan-don’t overcrowd because they do rise some. I actually preferred mine closer to together with first batch because they were softer because they were touching-if you spread them out as I did below they are lightly toasted on all sides instead of on top only and they bake a little quicker-so choose the method you like.

When I want fresh rolls in the a.m. I will do this part the day before, refrigerate and then bake the next morning. The uncooked rolls will last a couple of days in the fridge. 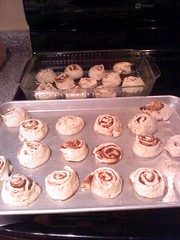 Bake at 400 degrees for  20 -25 minutes if you are baking more than two pans. One pan bakes about 15-20 minutes, but why bake one if you’re going to all the trouble of flour, honey, cinnamon (all messy) and electricity? Just bake them all at once, cool and freeze for a convenient breakfast or breakfast bar for dinner.

Make sure you allow them cool completely for an hour on a cooling rack before you freeze in a gallon size freezer bag (which can be reused) for future rolls. 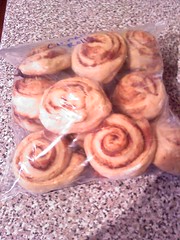 If you’re wondering where the icing is, I make mine on demand. I use a small ramekin and put about 1/2 cup of powdered sugar and a splash of milk and vanilla extract and make a thick consistency. Because I top it with icing, I feel I can use less sugar in the dough (remember I used honey). It works for us, but you do what works for your family.

Recipe linked to Tasty Tuesday and It’s a Keeper

Have you ever made more than one pan of cinnamon rolls and frozen them?