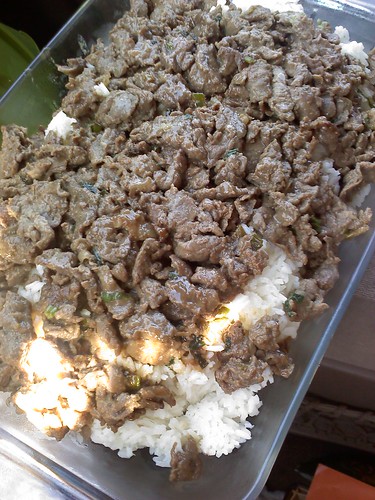 bul·go·gi Noun   /bo͝olˈgōgē/ Bulgogi is my homeland food. Actually, it was most likely rice, since I was an orphan before I came to America. You can read more about my story here. It’s a Korean dish of thinly sliced marinated beef. My mom inherited this original recipe and made it growing up. She would marinate it for twenty four hours and serve it “family style.” This was a treat for us, because it meant everyone got to help with the cooking. We had a long electric skillet and she would put it on the middle of the table. We all had chopsticks and we’d help turn the beef as it cooked. Mom dished hot rice on our plates and we would take what we liked off the skillet when it was done. Sometimes, she’d really make it authentic and pick up a glass jar of kimchi at the Korean market. I’ll never forget this family memory.

My ten year-old daughter reminded me of this recipe when she asked me to make it for her family heritage project at school. It’s an easy recipe and it resembles the Asian Sesame Honey marinade I often make. In fact, I couldn’t believe how similar it was as I adding the ingredients. This recipe uses sugar, which I know could be substituted for honey or brown sugar. It’s quite sweet and highly flavored with garlic. It calls for sesame seeds, which I was out of. I’d definitely give it a try if you’ve never had Korean food, just to say you’ve made it yourself. We served it to a room full of kids and they all asked for seconds. I had to let them down because I promised my husband a plateful for dinner.

My mom always bought a sirlion tip roast, but I had a Korean neighbor who marinated beef short ribs. I chose bottom round roast, which was more economical feeding a crowd. This was a 2.34# roast with very little fat as you can see. I cut it into strips that would fit inside my food processor tube and froze it for about three to four hours. I wanted it semi-solid to slice in the processor. 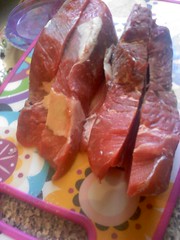 I saw a chef do this with cheesesteak sandwiches and it sparked this idea for this meal. Mine could have used a little more time in the freezer and the meat tends to pulverize rather than slice if it’s not frozen enough, but it worked. I sliced all the meat in four batches. 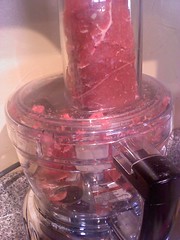 As you can see, it thinly shaves the beef nicely for stir-fry. The thin slices will marinate nicely. 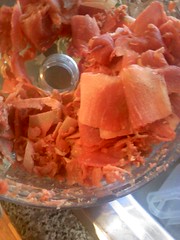 I slice several green onions for the marinade. 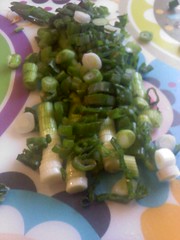 I make the marinade inside a gallon size freezer bag. I toss the green onions and beef inside. 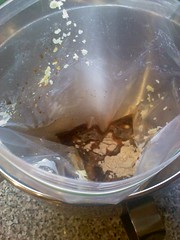 Next, is the easy part. Gently knead the beef right inside the labeled bag. 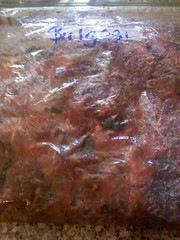 This is best stir-fried twelve to twenty-four hours later or freeze and thaw twenty-four hours and cook. Either way, it’s freezer friendly before cooking or after cooking. Feel free to portion cooked leftovers for lunches. We’ve never had leftovers-NEVER! Just thought I’d tease you. 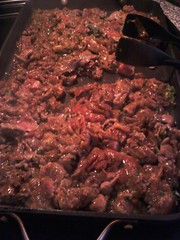 Pick up some chopsticks at a garage sale, thrift store or borrow a few pair for a fun family night. Invite a family over and double this recipe for a meal they’ll never forget.

I had to introduce my three-year old to chop sticks. He took it in very well. 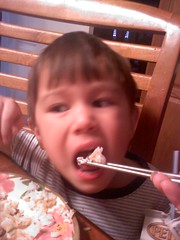 P.S. That’s my hand gracefully holding the chop sticks. But at least he was loving it and asking for more. I want my children to know their heritage. They have a mommy from Asia and she can cook Korean bulgogi. This will be a recipe I pass down to my children.

This feeds six hungry adults or four adults and several small people as a main entree. You can add julienned carrots to the marinade for added nutrition. Or add extra green onions if desired. I like to make zucchini and onions without additional soy sauce or a green salad with ginger dressing as a side. This entree resembles yakiniku at a Japanese steak house.

감사합니다 (gamsahabnida), “Thank You” in Korean. I know two words.

Do you have an ethnic dish/entree you will pass down to your children?